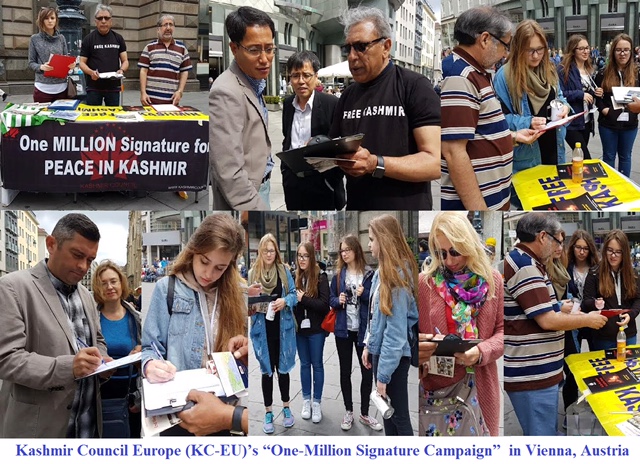 The Council's team arrived in Vienna Tuesday’s night after holding the signature’s campaign in Hungary and Slovakia in last two days respectively. Like two preview days in Budapest (Hungary) and Bratislava (Slovakia), a huge number of the people visited a one-day signature camp held in Vienna, the capital of the country on Wednesday

The EU based signature drive is a widespread awareness movement on Kashmir’s issue and a large number of European people in different countries including Belgium, Holland, Norway, Sweden and UK supported it by their signature so far.

A press release said, the like Budapest and Bratislava, the capital cities of Hungary and Slovakia, the camp in Vienna was also successfully organised by council and certainly acknowledged by a massive number of the people as they made their signature in favour of the oppressed people of Jammu and Kashmir.

The Kashmir Council EU has been supported by different local NGOs and social activists based in different European countries for motivation of the move.

At the conclusion of the three-day tour to three central European countries, Chairman Kashmir Council EU Ali Raza Syed said, a large number of the people specially youth including university students supported the rights of people of Jammu and Kashmir and opposed violation of human rights in the occupied territory.

He said, side by side receiving signatures from the people, the Kashmir Council EU’s team distributed the leaflets and brochures on Kashmir and presented a number of t-shirts with slogan of “Free Kashmir” on its front during the signature camps held in last three days in Hungary, Slovakia and Austria.

It is important to mention that basic aim of the EU based signature drive is to collect a million signatures in order to highlight the conflict of Kashmir and pressurize New Delhi to stop the human rights abuses perpetrated by the Indian forces in the Indian held Kashmir (IHK).

The collection of one million signatures will be presented in the shape of the document to the ‘European Parliament’s human rights committee’ in order to raise the issue of violations of human rights in IHK.

Highlighting the issues of a large extra-judicial killings, sexual abuses, forced disappearances and unnamed mass grave in IHK, Chairman Kashmir Council EU also urged the international Community to prevent violation of human rights in IHK and help the people of Jammu and Kashmir in connection with their right of self-determination.