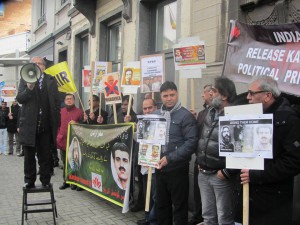 The Kashmir Council-EU  held a peaceful demonstration in front of the Indian Embassy in Brussels to commemorate the anniversaries of the martyrdom of two Kashmiris, Maqbool Butt and Afzal Guru.

Kashmiris on both sides of the ceasefire line (Line of Control) and across the world observe the martyrdom anniversary of prominent Kashmiri liberation leader, Muhammad Maqbool Butt every year on Feb 11.

Maqbool Butt was hanged in New Delhi’s Tihar Jail on the 11th February in 1984 for his leading role in the Kashmiris’ on-going struggle. He was buried in the prison premises.

Afzal Guru was second Kashmiri to be hanged and buried by the India. The execution took place on the February 19th, 2013 and evoked widespread condemnation by human rights organisations.

Despite confidence building measures and a ceasefire between the Indian and Pakistani armies in Kashmir repeated pleas by Kashmiris for the return of Maqbool Butt’s and Afzal Guru's remains to their families. No reaction on the part of the Indian authorities. These icons of the Kashmiri liberation struggle have been kept in prison even after their execution.

Denouncing the hanging of Maqbool Butt and Afzal Guru without proper judicial arrangements, the demonstrators demanded an immediate handing over of the remains of the two men to their respective families for proper funeral prayers to be held. A number of Kashmiris and their supporters attended the demonstration at which the speakers alleged that Guru was not given a fair trial.

In his statement, the Chairman of the Kashmir Council EU said, that India had acted inhumanely by holding bodies of the martyrs in jail.

Ali Raza Syed also warned that India cannot stop the peaceful movement of the Kashmiris in their struggle for the right to self-determination as agreed in the resolutions of the UN Security Council.