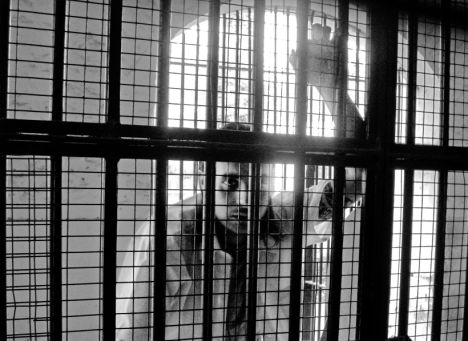 Kashmir Council-EU held organised unique demonstration in front of European Union Headquarters in Brussels on 22th of Oct 2010. The demonstrators, led by Kashmir Council EU Chairman, Ali Raza Syed presented the symbolic windows of the Indian prison to receive attention of the international community. The demonstration focussed on the large number of
political prisoners, at the one hand, and ruthless murders of the Kashmiris by the Indian forces, at the other. The protestors standing behind the symbolic jail’s bars chanted slogans against the Indian atrocities in the held Kashmir and demanded for release of political prisoners and stop of killings of the Kashmiris.

Speaking on the occasion, Chairman Kashmir Council EU, Ali Raza said they would continue raising their voice against the violence in the held Kashmir. He demanded the world community to pay attention on the horrible human rights violations by the Indian forces. He said a large number of people in the Held Kashmir were missing and majority of them were believed killed buried in the un-named mass graves in the different areas of Kashmir. He lamented the fact that more than one hundred of the Kashmiris particularly youth and minors were killed in the new waves of the struggle. He said that Indian forces had targeted particularly the innocent and peaceful youth in the recent months. He said that
Kashmir was the most important issue in the south Asia and that the resolution of the Kashmir issue was a prerequisite to the peace in the region. ‘The right of self determination of the Kashmir should be given to them for the just solution of the Kashmir dispute’, he demanded.

The chairman of Kashmir Council-EU stressed upon the need of a grand initiative by the international community to address the human rights’ crisis created by Indian troops in the Kashmir. He urged international human rights organisations to pressurize India to stop the state terrorism. He said international opinion was instrumental in the efforts to redeem the right to self-determination to the people of Jammu and Kashmir.