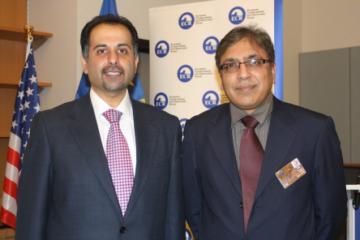 The International Council for Human Development (ICHD) and Kashmir Council-EU, IKV Pax Christi and MEP, Mr. Sajjad Haider Karim jointly organised a Kashmir-EU week in the European parliament in Brussels, Belgium on 14-16 September 2010. The event included a well attended seminar and a well received exhibition of the cultural heritage of Kashmir. Titled as, ‘Beauty of Kashmir, preserved past and bruised present,' the event was applauded by the prominent personalities of EU. By doing so, the European Parliament embraced the cultural and literary heritage of Kashmir while endorsing their demand of the realisation of human rights as enshrined in the UDHR and other documents of UN, EU and other human rights institutions and forums of the world.

The grand event was made possible through the office and efforts of MEP Sajjad Karim; the host of the event in EU parliament. The event was timed for the beginning of the EU parliament’s calendar session, reminding the EU to focus on eliminating the human rights abuses in Indian Held Kashmir. The event was a concerted effort to urge the EU to assist in finding a peaceful resolution to the Kashmir conflict.

At the inauguration of the event, MEP Sajad Karim welcomed the guests and thanked them for supporting the event and the people of Kashmir. He asserted that the European Parliament's representatives remained engaged in assisting the region to overcome the conflict and current unrest experienced there. He said though the political backdrop of unrest preceded the debate on Kashmir but the event had given the opportunity to know about the cultural heritage and the rich civilisation of the Kashmiri people whose art, poetry and literature had influenced South Asian culture.

The Chariman of Kashmir Council EU and ICHD Ali Raza Syed spoke of the beauty of Kashmir especially their cultural heritage of the tolerant nature of the Kashmiri people and their ability to live in peace for centuries before the Indian occupation. He said that the Kashmir had a rich tradition of a multi-cultural and multi-religious society. He said different identities lived peacefully with each others but the illegal occupation of Kashmir by Indian forces changed the entire situation there. He briefly explained the human rights situation of the Kashmir while saying that the torture, humiliation, murders and rapes had become the daily routine of the life of Kashmiris. He mentioned the disappearances and discovery of the mass graves in Kashmir as the most horrendous atrocities committed in the modern world. He assured the participants that they would continue doing peaceful struggling for the right to self determination of the people of Kashmir.

Marjan Lucas of IKV Pax Christi, while introducing the photographs of Govert Driessen, said that international community had a burden on its conscience. She said that no human rights activist of the world could afford to neglect the gross violation of the human rights of Kashmir people. She also mentioned the mass graves of unknown Kashmiri civilians while saying that everybody knew that these people were innocent local Kashmiris killed by the brutal Indian forces. She said that the slow but steady efforts for building awareness in the Western opinion makers was essential for the human rights campaigners focussed on Kashmir. She congratulated ICHD, KC-EU and MEP, Mr. Sajjad Haider Karim for organising such an important event in EU.

Dr. Seema Kazi read the excerpts from her book, which highlighted the plight of women in the Kashmir conflict. She spoke of the human rights abuses faced by the women on a daily basis and the lack of any justice being provided.

Mr. Farooq Siddiqi of World Diaspora Alliance reiterated the need to remind the international community and the European Union that they had a responsibility to intervene in Kashmir and administer the United Nations pledge for a resolution. He also talked about the significance of events such as they gave hope to the Kashmiri people.

jThe MP, Danielle Caron described the beauty of the landscape and mountains of Kashmir one of the best in the world. She said that Kashmir had a special place in her heart since she had visited the region. She said she was highly perturbed to see the poverty and lack of security in the collective life of the Kashmir. She pledged her fullest support for any effort of bringing peace in the region.

The Head of the Labour Party Group spoke the words of encouragement to the organisers of the Kashmir-EU week. He said that there was very impressive number of the participants of the event. He specially praised the exhibitions as remarkable initiative to portray the full picture of the collective Kashmiri civilisation.