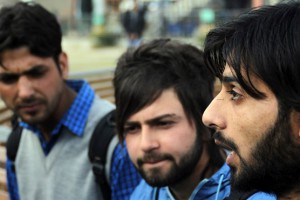 A press statement, on February 5, 2012, by ICHD severely condemned the martyrdom of six innocent Kashmiri youth in Indian Held Kashmir. The Chairperson ICHD said, killing of innocent people in the occupied valley is a significant proof of state terrorism by New Delhi and we can not tolerate the atrocities against our Kahsmiri brothers and sisters.
Ali Raza Syed said, he would highlight the issue strongly in the Kashmir Conference in Spanish city of Barcelona, which was going to be held on the occasion of Kashmir Solidarity Day, (5th Feb). As one of the key speakers of the conference, he hoped that this grave incident of brutal murders was only a recent example of what was going on in Kashmir for last six decades.
According to the report issued by Kashmir Media Service, Indian troops, in occupied Kashmir, killed six innocent Kashmiri youth during fierce clashes between protestors and the Indian police personnel Thursday. According to reports, of those martyred, five youth were shot dead in Kishtwar and one in Mendhar. Ali Raza Syed also expressed concern over the arrest and house confinement of the Kashmiri leaders in Sri Nagar.
The occupation authorities confine the APHC Chairman, Mirwaiz Umar Farooq to his residence in Srinagar and arrested senior Hurriyet leaders, Shabbir Ahmad Shah, Nayeem Ahmad Khan and Firdous Ahmad Shah lodging them in Kathua jail outside the Kashmir valley. They have been booked under the draconian law, Public Safety Act. The police also raided the house of JKLF-R leader, Javed Ahmad Mir to arrest him. Another Kashmir political figure, Saleem Nannaji is already imprisoned in IHK.
The chairperson ICHD demanded early and unconditional release of all the prisoners while saying that his organisation was with the people of occupied Kashmir and will continue raising voices against the Indian state terrorism in IHK. He urged the international community to take serious notice of the current grave situation in the held Kashmir and send impartial observers to examine the situation there. Situation is very serious in the IHK and if such circumstances are continued, the region would be more flammable.